STAGE/SCREEN - "PORK"
As well as a successful music career spanning over 40 years Jayne has also appeared in numerous plays and films including the Andy Warhol directed "Pork", Derek Jarman's punk movie "Jubilee", the Ramones musical "Gabba, Gabba Hey" and her own plays such as "World - A Birth of a Nation". The pages within this section of the site aim to give you just a flavour of Jayne's stage and screen career. 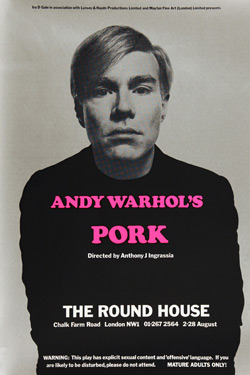 "Pork" was a play written by Andy Warhol.  It ran for two weeks at LaMama theater in New York  from May 5th 1971 and then later ran for almost a month at The Roundhouse in London during August of the same year. Jayne played a character named Vulva Lips - a bitchy blonde superstar.

The posters which advertised the London run stated "WARNING: This play has explicit sexual content and 'offensive' language". If you are likely to be disturbed, please do not attend,  MATURE ADULTS ONLY!"

"Pork" was based on tape-recorded telephone conversations between Andy Warhol and Brigid Berlin about her family's private life - Brigid's mother was a New York socialite.