STAGE/SCREEN - "CITY OF LOST SOULS"
As well as a successful music career spanning over 40 years Jayne has also appeared in numerous plays and films including the Andy Warhol directed "Pork", Derek Jarman's punk movie "Jubilee", the Ramones musical "Gabba, Gabba Hey" and her own plays such as "World - A Birth of a Nation". The pages within this section of the site aim to give you just a flavour of Jayne's stage and screen career. 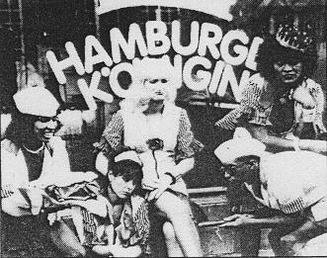 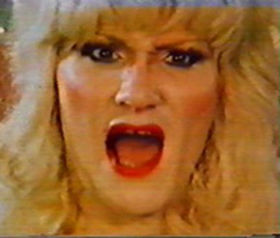 The film begins with the staff of a Berlin burger bar called "Hamburger Koningin" (Hamburger Queen) dancing around as Jayne (also an employee of the restaurant) sits on the counter and sings a song called "Burger Queen Blues" . The boss (Angie Stardust) arrives and tells them all off for not working. 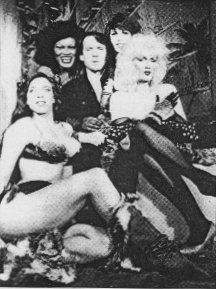 An American couple called Tron and Judith Flex arrive at the restaurant. They are in Berlin to perform their erotic striptease act. Angie offers them a room at her boarding house - "Pension Stardust". Before she retired to Berlin thirteen years previously Angie had been the first black transsexual to perform in New York. Also resident at Angie's are Lila (Jayne's character) who came to Berlin from America's deep south to find the love of a German boy. Lila has dreams of making it big in Hollywood. In the next room to Lila is Gary - a trained dancer who is now involved in "magic and group therapy". Loretta also lives at "Pension Stardust". She is always very sad. Loretta wants to be an actress but nobody wants her. She shares a room with Tara O'Hara who "teaches men English". This activity generally takes place in the middle of the night! The final house guest is Joaquin - he thinks he is the greatest show star in the world. He believes he's following in Angie's footsteps.

Tron and Judith move into "Pension Stardust" and Tron is seen complaining about the lack of hot water when he has a show that evening. Tron and Judith are then shown performing their act.

The scene now switches to "Pension Stardust" where Tron is shown waiting desperately to use the toilet whilst Gary spooks him. Lila emerges from the toilet with a white face and painted breasts holding up three toothbrushes and speaking in tongues. She appears to be under the control of Gary. 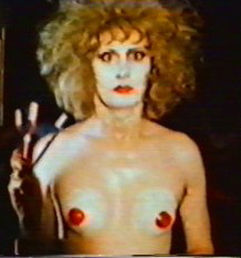 Some time later Angie and her lodgers are all watching Ronald Reagan on television and singing the "Star Spangled Banner". Gary is wearing a Reagan mask. Lila tells how she wants to move in with the Reagans. She doesn't want to be a communist but wants to be the one in charge. She wants to push the button.

Back at the restaurant Angie is seen directing customers using a loud-hailer to inform them when they can get served. The staff are serving horrible food (ie food containing cigarette ash) and are abusing the customers. 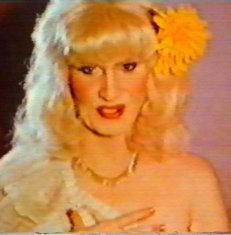 The following scene features Angie back at "Pension Stardust". She reminisces in song about the United States. Angie tells of how her parents didn't understand her sexuality and tells of how her father tried to beat it out of her. One day Angie saw transvestites with breasts and decided to become a woman. She went to the 82 Club to sing but was initially turned away because of her colour. She succeeded in the end however and became a star. One day she received a telegram asking her to go to Germany and after initially being scared she went and found herself a girl to be with and love. Angie and a girl then kiss.

Returning to Tron and Judith. Judith is shown questioning Tron about his whereabouts the previous night. She rebukes him for his gay lifestyle. 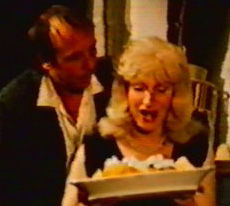 Lila is shown cleaning up at the restaurant and looking bored. Tara shows up and asks Lila if she'll see a politician for her as she doesn't have time. Tara tells Lila that the politician will give her champagne. She also tells Lila that she has arranged for her to work at a strip club for 25 marks a night. Lila is then shown with the politician (Wolfgang) later that evening. They are talking and Lila is eating and drinking excessively. Wolfgang tells Lila of his wish to clear out the miscreants from Berlin.

The action returns to Judith who is out walking with a Jewish American friend. Her friend tells her how some Germans are still very anti-Jewish, Spanish, Turkish etc. Judith tells her friend that most races have the same prejudices.

Returning to Lila she is with Joaquin in the restaurant and is worried about stripping. Joaquin tells her that he can help as he has stripped. He demontrates wearing a variety of outfits and sings - all to Lila's initial horror.Lila makes a list of items such as glitter and feathers which she needs to be a stripper. She is now excited by the prospect.

Back at "Pension Stardust" Gary is performing "group therapy" with his naked followers. His followers crawl out of his room into a room where Angie is cleaning. She hassles them about rent whilst they crawl through her legs. Angie then rebukes Gary about his behaviour and asks him to leave. 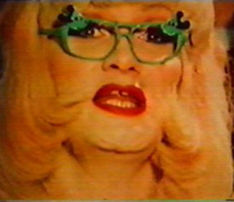 On a night out Lila and Judith arrive at a club as a boy is fighting with his girlfriend. Judith chats the boy up and they leave. On a date the following day he takes her to Nazi monuments and tells her that his father was a Nazi. Judith then tells him that she is Jewish. The couple decide that they can still hopefully be friends or even lovers.

At Hamburger Koningin an old woman is telling everyone about the importance of fucking and is getting her tits out for the diners. Joaquin then sings her a song about sexual freedom for everyone.

Tara is at "Pension Stardust" preparing for a night out. She asks Angie for something to wear. Tara is content as a transvestite but Angie wants to have a sex change. They talk and Tara says she feels the operation is not necessary. Angie tells her that it is because of the "old school" such as Angie that Tara is able to be as she is. Tara invites Angie out with her and she agrees to go. She tells Angie to accept that she's the third sex (transvestite not transsexual). Angie says she prefers "new women". 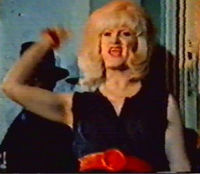 The time has arrived for Lila's premiere at the strip club. She dances and sings very badly and the audience throw things. Lila runs back to her dressing room upset. A man is already in there which scares Lila. He tells her that she is beautiful and talented. The man introduces himself as Jurgen from East Germany. Lila tells him she is scared of what they do in the east but he tells her not to believe propaganda. Jurgen gives her East German champagne and Russian caviar. He tells Lila that the East are always after international artists and have previously played host to people such as Joan Baez and Jane Fonda. Lila says that Joan was a communist and she doesn't like them as her mother didn't like them. Jurgen promises her she would become a big movie star in the east. He says she could have everything for free and could have a limousine - a Lada. He tells her she could have a free face-lift which she takes as an insult and calls him a commie as they force people to have operations. Jurgen manages to sweet talk her however.

Back at the restaurant an eighty year old man is insulting both the food and Angie. He threatens to get the health board to close the restaurant down and refuses to pay. Another customer complains that people have been being sick. 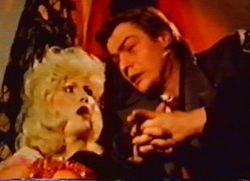 The scene cuts to later in Angie's bedroom as she sings "I'll Get By". Tara arrives home and wakes Loretta. She kicks her out of their room and tells her to go to Angie's. Tara has a man (Manfred) with her. He wants to have sex but she just wants to talk. She tells him she is a different kind of woman to those he knows. At first he doesn't realise what she is trying to tell him but when she explains he is upset and says she should have told him. He tells Tara he is not gay. She says she is the third sex and liking her does not mean he is gay. He comes around to her view of things and they kiss. 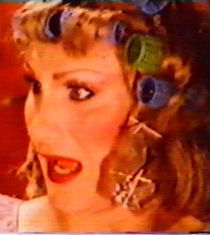 In Angie's room Loretta is moaning about how Tara always kicks her out. Angie is unsympathetic. Later Lila arrives to talk to Angie. Lila is wearing curlers and drinking from a bottle of wine. Angie tells her to control herself. Lila complains about bed bug bites and describes Pension Stardust as a pig pen. She says she has stepped in dogshit to which Angie replies that it is good luck to do that. Lila also complains that there is no toilet paper. Lila then confesses to Angie that she is pregnant by a communist and is worried about what her mother will say. She says she wants an abortion but Angie says that is murder. Lila says she has still got to kill the baby.

Judith arrives to train on the trapeze. She begins without Tron despite being warned it was too dangerous alone. Tron arrives just as she falls to the floor. She's bleeding. He calls for a doctor . Judith ends up in a wheelchair andTron finds religion as a result of his guilt and believes he has healing powers.

The burger bar is held up by gansters and as a result Angie can't pay the staff's wages. To raise money she asks her tenants to pay their rent. Gary and Loretta want to get work at the opera theatre.Lila pours her heart out to Jurgen. He tells her he will take her to the east and make her a star. He asks her to tell him about Wolfgang.

Loretta arrives home happy that she has been offered a big role at the theatre. Angie is surprised and worried about who would replace her at Burger Queen.

Gary arrives mad at the police for wanting to deport him.

Lila calls Angie from East Germany. She tells her she is on East German television singing for the "Red President". She is performing "I Fell In Love With A Russian Soldier". Tron and Judith watch her on TV with Loretta and Angie. They celebrate Lila's sucesss but Gary and Tron don't as Gary is to be deported the next day.

Angie returns home to smell burning - Gary has set his room alight. Angie throws Gary into the burning room. Tron tries to save (in the religious way) Gary and tells him not to be ashamed of his blackness. As the fire brigade fight the fire Angie is wandering the streets. Tron and Gary are looking down on the restaurant as angels. Angie arrives at the restaurant as the cast party inside. They sing "City Of Lost Souls". Angie joins them in the song and the shutters come down on the restaurant.