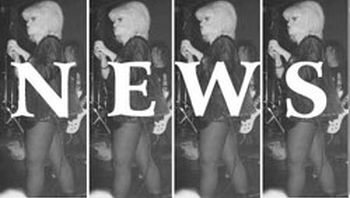 March 1st: Jayne has begun DJing at LIMELIGHT in Manhattan on Wednesday nights.

May 18th: RCA in America have released a Cherry Vanilla CD containing the albums "Bad Girl" & "Venus D Vinyl". This contains the track "Wayni's Sweet" which was written about Wayne in 1978.

May 29th: Plans are afoot to try to arrange the release of a Wayne County & the Backstreet Boys show from 1976 at "Max's". Tracks include: "Putty", "Cream In My Jeans", "Brainwashed", "No One Woman Can Satisfy", "The Older They Get,The Younger They Want" and Wayne's Patti Smith Parody.

May 29th: Jayne may be appearing at a club called "Scream" in L.A. in July. Further news as I get it.

May 30th: Jayne is performing at Squeezebox in Manhattan on Friday July 14th. It's a birthday celebration and she'll do a mini tribute to "Wayne County & the Backstreet Boys". Call Don Hills on 212 219 2850 for more information.

June 13th: Jayne will be joined onstage by Dick Manitoba of the Dictators for the Squeezebox show. They'll duet on "California Sun".

June 21st: Last Saturday night Jayne performed a one song ("Fuck Off") guest spot at the Glitterdome in Atlanta. She was accompanied on guitar by Sylvain Sylvain of the New York Dolls.

August 9th: Jayne is featured on page 24 of the latest edition of the U.K.'s "Uncut" magazine. There is a full page featuring a review of her career and a lovely picture from what I would guess to be about 1974.

August 23rd: Jayne is mentioned in this weeks New Musical Express in the U.K. In a feature about the Reading rock festival she is credited as having been responsible for the start of the missile-throwing tradition at the festival. When the Electric Chairs appeared in 1977 they were forced to cut their set short after they were pelted with mud, cans and bottles by the fans of bands such as Hawkwind, Aerosmith, Alex Harvey and The Doobie Brothers.

September 22nd: Jayne recently attended the launch party for Madonna's new cd "Music" in Los Angeles. Although Madonna was present the two didn't get the chance to chat.

September 22nd: Look out for a new single from Jayne soon. Jayne will be releasing a version of Shania Twain's "Man I Feel Like A Woman". So far only a U.S. release is scheduled on Strong Island Records.

October 22nd: Jayne cancelled her appearance at Brownie's on October 14th over a billing dispute.

November 5th: Jayne appeared onstage briefly with the Toilet Boys at Don Hill's Squeezebox in New York on 28th October. Jayne was D.J.'ing for the Halloween night and performed "Night Time" with them. Also in attendance were Ace Frehley (Kiss) and Jesse Camp from MTV. Pictures taken by Michael Corran will hopefully appear on site soon.

December 2nd: Jayne will be performing at El Mocombo (464 Spadina Ave) in Toronto, Canada on Friday 29th December. For more details call them on 968-2001.

December 30th: Jayne's show at El Mocombo, Toronto last night was cancelled due to the death of Jayne's sister. I'm sure all fans planning to attend will appreciate that the show could not go ahead under the circumstances.

January 6th: Jayne was apparently on German TV on December 27th in a documentary called "Pop Odyssee:House of the rising punk". If anyone has details on this (or hopefully a recording) please drop me a line.

January 11th: Jayne will NOT be appearing at the Max's night at Don Hill's on January 20th as was previously reported on this site. Unfortunately the date of the show was changed and as a result Jayne can't appear. Apologies for any confusion.

January 15th: "Fuck Off" is scheduled for U.K. release on 15th February. It will be available as a 12" and CD single.

February 10th: Warren Heighway and Veronica Kofman (who wrote "Poison Heart : Surviving the Ramones" with Dee Dee) are putting together a book of "rock 'n' roll Wayne/Jayne County stories". If you've an interesting tale to tell write to Warren at Trace Element Corporation, P.O. Box 51, Worsley, Manchester, M28 5DL, England. Any photos of Wayne/Jayne would also be appreciated - make sure you have a copy though as return of them can't be guaranteed.

February 10th: Warren also tells me that Jayne has been working on some new material in L.A. No news on a release as yet.

February 11th: Jayne will be performing and DJing on the West coast of the US in March including an appearance at Club Cherry in L.A. on March 2nd.

February 17th: Jayne got two mentions on the UK documentary "Walk On The Wild Side" which aired tonight. The show looked at "gender confusion in rock 'n' roll". Ray Davies (Kinks) mentioned how she turned up to a Kinks show along with Holly Woodlawn & Candy Darling. Holly Johnson (Frankie Goes To Hollywood) told of how he and his friends were fascinated by this "exotic creature" when Jayne played Eric's (a club in Liverpool). A couple of still pictures of Jayne accompanied the comments.

February 22nd: "F**k Off" was released today. April 18th: A new boxed set of punk tracks is released by Universal Music tomorrow entitled "1,2,3,4". The box contains five compact discs featuring one track each by a vast array of punk acts. It also includes a booklet containing information about each of the artists featured. The Electric Chairs "Fuck Off" is included.

May 27th: Jayne is still DJing at Life in New York. Hopefully the new versions of "Fuck Off" will soon get a release in the US on Royalty Records. Activ in the UK are considering a further single also. More news as I get it.

June 6th: Royalty Records will release "F**k off" in the US on August 13th. The plan is to include an acapella version to enable a remix contest with the winning remix version being included on the next single. What that next single would be is undecided but it could possibly be a remix of "Cherry Bomb".

September 5th: Jayne is mentioned in the credits on the poster to the film "Born To Lose, The Last Rock 'N' Roll Movie" (a tribute to Johnny Thunders and the New York Dolls).

September 21st: Jayne is No.5 in the Billboard Sales Breakout chart with "F**k Off 2000". This is Jayne's first ever chart appearance in Billboard.

Thanks to Warren Heighway for help with the above information.

January 8th: Jayne is currently recording new material in New York. This is unlikely to be released until at least May or June.

January 8th: Next possible UK dates will not be until about May.

January 8th: Jayne has re-recorded "Fucked By The Devil". If any record label out there would be interested in releasing this (established labels - not fans!) please contact Warren Heighway at Trace Element Corporatin, P.O. Box 51, Worsley, Manchester, M28 5DL, England.

January 22nd: Jayne is in the process of moving into a new apartment she has found in New York. She is no longer connected with Max's. A new DJing residence will begin in the next few weeks at a club called Life. This will be on a Wednesday evening and is run by the same people behind Squeezebox.

January 22nd: Although Jayne recorded a new song for a Max's tribute album this album has now been shelved for the time being. The new material Jayne has been recording for her own album is being recorded with Royalty Records.

May 24th: Jayne is now DJ at Max's Kansas City which has reopened in New York.

August 25th: Max's Kansas City has closed after failing to take off.

August 25th: A play entitled "Hedwig & The Angry Itch" (an off Broadway production) has been picked up by New Line Cinema for a film version. The storyline seems remarkably similar to Jayne's life story!

August 27th: Jayne will star at Wigstock in Manhattan on September 6th.

October 10th: Activ Records will release a dance version of "Fuck Off" in the UK in December. Mixes are by "Jewels and Stone" & "Sleazesisters". Activ have the rights for release throughout the world and are looking at releasing the track in as many places as possible. More news as I get it.

October 18th: "Fuck Off" dance mixes will be issued in two cd formats featuring different mixes. These will probably be released a few weeks apart.

October 19th: Jayne will be performing with Eliot Michaels & Mark Bell (Marky Ramone) at a party to launch the book "High On Rebellion" by Yvonne Ruskin. This is Yvonne's book about Max's Kansas City which will hit the streets in the U.S on November 2nd (published by Thunder's Mouth Press/Avalon). The book features Wayne/Jayne along with Cherry Vanilla, Johnny Thunders, David Bowie, Iggy Pop, Lou Reed, Blondie and loads more. The band will be billed as "Tribute to Wayne County & The Original Backstreet Boys" and will perform songs that never got recorded such as "Queenage Baby", "Stick It In Me", "Rock and Roll Enema" & "It Takes A Man Like Me To Find A Woman Like Me".

November 5th: The launch party for Yvonne Ruskin's book on Max's took place tonight with Jayne in attendance along with others such as Cherry Vanilla, Leee Black Childers, Penny Arcade, Taylor Mead and Cyrinda Foxe. Although Jayne didn't play at the launch the Backstreet Boys tribute/reunion is still planned (see October 19th for further details).

November 11th: The "Fuck Off" single has been delayed. This is to allow it to receive as good exposure as possible by DJs over the Christmas party season and to avoid it getting "lost" at Christmas when new releases are largely ignored.

November 11th: Jayne has been filming for a UK TV show called "Rock 'N' Roll Babylon". The show contains an interview and some footage. I don't have an exact date for transmission as yet but possibles are 11th, 12th or 19th December on Channel 4.

December 13th: "Rock Babylon" is listed on the Channel 4 website to be transmitted at 22:30 on December 19th. No mention of Jayne in the write up but hopefully she'll be featured.

December 14th: "Fuck Off" dance mixes are receiving good reactions in the clubs and are featured in "Music Week" (UK trade magazine) most requested club chart top 30 at number 27.

Thanks to Warren Heighway, Peter Crowley, Rupert Smith & Activ Records for the above information.

August 5th: Jayne compered at the Viper Room in L.A. tonight. She introduced a band called Vince Lightning and the Spectaculars. In attendance were stars such as: Steve Jones (Sex Pistols) and John Taylor (Duran Duran).

August 9th: Jayne is at present in Los Angeles DJing at Club Goldfingers.

September 5th: Jayne DJ's at Club Goldfinger's tonight. On September 11th she will DJ at Bar Marmont on Sunset Boulevard before heading back to play at the grand re-opening of Max's Kansas City in November.

September 8th: Good news for UK fans. Kastle tells me Jayne is planning to return to the UK in December. No details of any shows yet however.

September 9th: Look out for Jayne performing "Down On The Street/Little Doll" on "We Will Fall" the forthcoming Iggy Pop tribute album.

November 29th: Jayne joined the Ramones onstage tonight and performed "I Wanna Be Your Girlfriend" (not boyfriend!).

September 18th: Jayne will play at the Garage in Highbury, London on Thursday October 3rd 1996.

October 2nd: Jayne's show at The Garage tomorrow is cancelled due to "poor ticket sales".

December 5th: Jayne is in New York at present and recently did a spot as guest DJ at Coney Island High.